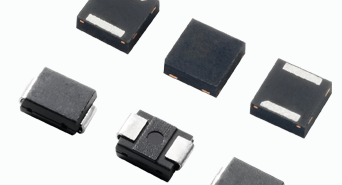 Littelfuse’s PLED series open LED protectors provide a switching electronics shunt path when a single LED in an LED array fails as an open circuit. This ensures the entire array of LEDs will continue to function even if a single LED in the array does not.

The device is compatible with one watt LEDs that have a normal 350mA, 3V characteristic but can extend up to 100 Ma LED applications.

Littelfuse’s PLED5 protector provides three methods of increasing the reliability of LED lighting. This device provides a substitute electronic path so that the array continues to function if one of the LEDs in an array fails. The PLED 5 QFN protects against ESD events up to ± 8 kV for contact discharges and ±15 kV for air discharges per the IEC 61000-4-2 electrostatic immunity standard. It provides protection in the case of accidental revers battery or power connection. This device is ideal for high reliability of lighting functions such as traffic lighting, advertising lighting and runway lighting.

Littelfuse’s open LED protector provides a switching electronic shunt path when a single LED in an LED string fails as an open circuit, this ensures the entire LED string will continue to function even if a single LED in the string does not. This provides increased reliability for lighting functions in applications such as headlights, aircraft lights airport runway lighting, roadside warning lights.

The PLEDxN is compatible with one watt rated LEDs with a nominal 350mA current 3V. The SOD-123FL package is one of the lowest height profiles (1.1mm) packages offered in the industry. The PLEDxN is also used in replacement of PLED 5HT SOT and PLED 6M.

Littelfuse’s PLEDxSW series open LED protector is connected in parallel with each LED in a series string. If one LED fails as an open circuit, the PLED connected to it turns on and carries the current that would have gone through the failed LED.

This device keeps the rest of the string operating, so only a single LED goes dark rather than the whole string. The PLEDxSW has a molded white body that reflects more light to enhance overall light engine efficiency.

Littelfuse’s PLEDxUx unidirectional series open LED protector provides a switching electronic shunt path for when one LED in a string fails as an open circuit.

For further information on Littelfuse's Surface Mount LED Protectors, please call our team on: 01444 243 452 or email: .(JavaScript must be enabled to view this email address).

Littelfuse is a global leader in circuit protection, power semiconductors and power control and sensing platforms. The company was founded in 1927 and acquired IXYS Corporation in 2018.

You can find further information on Littelfuse using the following links: